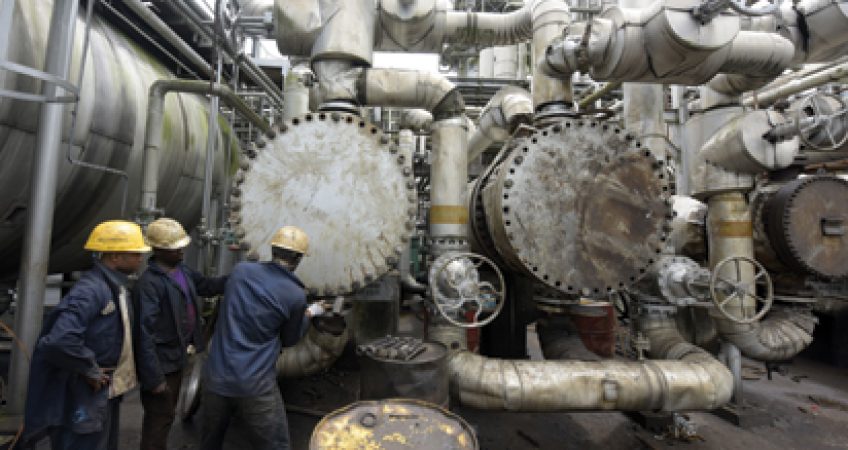 One Swahili proverb says that forgetting is the cure for suffering. Nigerians must have accepted the case of our refineries that are in limbo without being unduly upset. The rest is silence as we acquiescently resigned to fate that we have no solution to petroleum products import. But it is not the best way to survive the Nigeria’s recession.

Nigerian authorities should remember that our refineries are not beyond redemption as they assume or make us believe. Successive governments including the 16-month old President Muhammadu Buhari’s administration ignored the rehabilitation of our refineries even when a balance to produce crude for export and refining crude for domestic consumption should be maintained.

Has Nigeria accepted the fact that four out of 745 operational global refineries located in Port Harcourt (1&2), Warri and Kaduna should be condemned to antiquity as a matter of policy? Of the 49 global national oil companies, the NNPC does not have a dynamic and vibrant downstream sector including refineries and petrochemicals for local consumption. It beats ones imagination that we have the crude, the refineries and the market yet no refining capacity.

Ordinarily the NNPC was established in 1977 as an integrated national oil company. An integrated oil company is that with oil value chain from upstream to downstream. The NNPC was for refining, treating, processing and generally engaging in the handling of petroleum for the manufacture and production of petroleum products and its derivatives, but reduced to a marketing company that imports and distributes petroleum products. The history of the refineries may assist us in context. Port Harcourt 1 was constructed by Shell-BP in 1965 at a cost of £12 million. It had a capacity of 38,000 barrels per day (bpd) and upgraded from 38,000 to 60,000 bpd and was taken over by the Federal Government in 1971. The Federal Government in 1974 engaged a Texas based petroleum consultancy firm for a feasibility study on how to increase supply.

In November 1975, contract for the construction of Warri Refinery and Petrochemical Company was awarded to Snamprogetti SPA of Italy for 100,000 bpd at the cost of US$478 million. It was for a 30-month period and was commissioned in September 1978. Kaduna Refinery and Petrochemical Company contract was awarded to Chiyoda Engineering and Construction Company of Japan at a cost of US$525 million in 1976 for 100,000 bpd (refining in two streams of 50,000 for fuels and 50,000 bpdfor lubes)with a completion period of 36 months and was commissioned in 1980. The 1974 feasibility was updated to meet new products demand.

Warri was upgraded from 100,000 to 125,000 bpd while Kaduna fuel plant was increased from 50,000 to 60,000 bpd in 1985. Port Harcourt 2 was also designed for 150,000 bpd and awarded to a consortium of JGC Corporation, Marubeni Corporation (both Japanese) and Spibatignolbs of France in October 1985 at a cost of US$850 million for 36 months completion and commissioned in 1989. It is noteworthy that between 1991 and 1992, the new Port Harcourt plant exported products and made $280 million for government. Exports however stopped later because Kaduna and Warri productions dropped.

The NNPC wholly owned Eleme Petrochemical Company was constructed in 1990 by a consortium of engineering and EPC contractors of Chiyoda Corporation, JGC and Kobe Steel of Japan, Technimont of Italy, and SpieBatignolles of France at a cost of US$2.4 million. It commenced production in 1995 and was sold in August 2006 at a paltry sum of US$215 million. A required turn around maintenance was what the preferred investor did to invite the then President Olusegun Obasanjo for commissioning on the 12th of October, 2006. Our refineries with a combined capacity of 445,000 barrels per day can process crude for our needs if we have the will.

At the zenith of our consumption of petroleum products, petrol or premium motor spirit, PMS, estimated consumption was not more than 40 million litres (208,799.40 barrels) per day. The four refineries at optimum capacity can process 40.1 million litres (209,150 barrels) per day. Are our refineries old? No! The oldest refinery in the world, the Digboi refinery, Assam in India constructed in 1901 is still refining crude. The oldest refinery in Jeddah, Saud Arabia was constructed in 1967. The newest complex refinery in the United States, the Marathon Petroleum Company in Garyville, Louisiana was constructed in 1977 and upgraded from a 200,000 bpd to 522,000 bpd capacity plant in 2014. Refineries are strategic for economic, political and security.

An aspiring regional power like Nigeria should not rely on petroleum products import.We gain technologically through skill acquisition in the petroleum industry. Using petroleum to industrialise would increase gross domestic product (nominal or purchasing power parity) and earn more revenue for government. Highly industrialised economies depend heavily on petroleum as fuel and chemical feedstock. Over 90 percent of transportation in the United States relies on petroleum. Agriculture is a major beneficiary of petroleum.

Nigeria’s population that is growing in geometric progression risks the danger of food scarcity if we do not have a strong petroleum base. Agricultural productivity is increased largely due to the use of chemical fertilizers, pesticide sand increased mechanization. Nearly all pesticides and many fertilizers are made from petroleum. Pesticides rely upon petroleum as critical ingredient, fertilizers require natural gas and farm machinery also requires petroleum.

Assumptions are that the NNPC lacks technical and managerial competences. In June 2016, officials went bellyaching to China in the first phase of a three-legged Asian roadshow to woo investors in the downstream sector. The Minister of State for Petroleum Resources, Dr. Ibe Kachikwu as delegation leader, said he attracted about US$80 billion in a series of memoranda with the Chinese. In the trip, the Chinese Department of International Cooperation, DIC of the National Reform and Development Commission, NDRC was made to fashion a blue print for would be investors, develop an overarching master plan for Nigerian oil and gas, detailed feasibility studies of current status of the existing infrastructure in the industry and develop bankable projects that would attract Chinese investors on the government-to-government platform.

That travelling campaign may have put us in a disadvantage position for negotiation. It is ones belief that we should have a clear-cut business and investment policy that shows starting an oil business, state of infrastructure, granting permits, investors protection, enforcing contracts, getting credit, paying taxes, crime, corruption, and other indices on the ease of doing business in Nigeria. Really our refineries must not be left in oblivion for therein lay our petroleum products security.