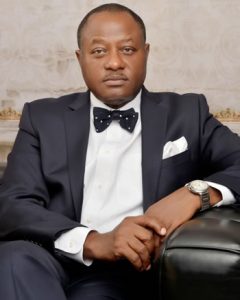 Mr. Andy Isichei is currently the CEO of Cybernetics. His resume is given below.

Mr. Isichei was formally the MD/CEO of National Clearing & Forwarding Agency (NACFA) from 1999 -2006. NACFA was a parastatal under the Federal Ministry of Transport.

Mr. Isichei, who is a turnaround specialist, was able to revive the Agency from its comatose state to a prosperous self-financing commercialized parastatal. He improved the asset base of the company from ₦28M in 1990 to ₦3.2B in 2006. The Agency was eventually privatized by the Federal Government in 2006 at a princely sum of ₦3.6B. This is a testimony to the market appreciation of the value-adding revival efforts of Mr. Isichei and his able team in NACFA.

He is a fellow of the Institute of Chartered Accountant of Nigeria (ICAN). He holds a Master of Business Administration (MBA) degree from the Rivers State University of Science and Technology, Port Harcourt, Rivers State and a M.Sc. in Corporate Governance from LEEDS Metropolitan University UK. In 1992, he was awarded a certificate in Crude Oil, Gas Accounting and Taxation from the University of Texas.

He has received extensive accolades and coverage by the Nigerian public and media for his outstanding leadership qualities. He has also received awards including the “Most Valuable Maritime Director” in 2001 and a commendation from the Federal Executive Council in December, 2000.